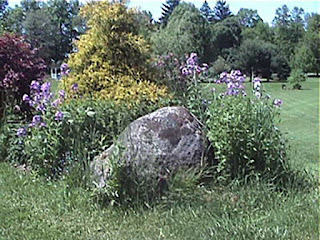 Many years ago, I knew a man who collected rocks. He was retired at the time but everyday he would go out searching for rocks. Some were big, some were small but he kept them all. I asked his wife about the curious collection and she simply said it kept him busy.

I'm not quite that bad but I do enjoy rocks, especially large ones. In our neck of the woods we have several places to go and wander through large formations of rocks. There is Thunder Rocks, Jakes Rocks and a few others. Over the years we have visited each place several times and have never been disappointed. Thunder Rocks are products of one of the last glaciers. 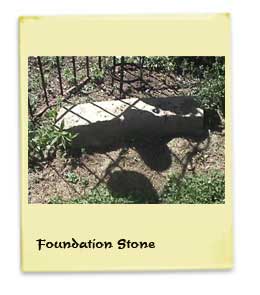 Luckily we have a neighbor with a backhoe and when he finds a big rock he almost always asks me if I want it. I think he has come to appreciate the rocks himself which might take away from my gifts. He places them anywhere I want them on the property and as long as it hasn't rained the backhoe doesn't leave marks in the lawn. Hey but you know what they say, beggars can't be choosers! I have a nice selection of large rocks in my gardens. Some are large enough to lay on and
with flowers all around them, they look really nice. I wouldn't mind having a thunder rock in my back yard.

My father has made some cute cement stones by using forms and placing different colored rocks and shells in them. They are arranged in my favorite garden right off the back patio. They are probably Thirty years old and still look new.

The entrance to the rose garden has a sentimental man-made patio stone. We used a form about four feet long and twelve inches wide. We put each of the family members names on a stone and the year each of us were born and a penny with that date on it. It is a great conversation piece. 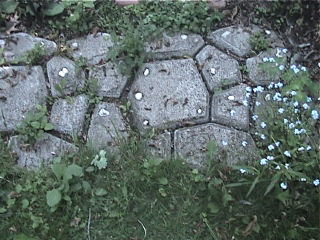 We have found rocks buried on the property. Some were removed because they stuck up just enough to become a nuisance, especially with the hand mower or just walking in some cases. To all of our surprise the more we dug, the larger the rock was becoming. In most cases it took everything we had to move the rock where we wanted it. Also when the barn was being torn down we found some unusual looking stones. They are approximately four feet long and eight inches high. They look perfectly formed as if someone had make them, but I don't think that is the case. We found three of them and they are also in the rose garden.

When I get older, I suppose someone will look at our property and wonder where all the rocks came from and maybe get a giggle or two out of it because I can't see me quitting when I have so many years to collect.

From our backyard to yours, take a walk and go exploring.