For some reason over the last year or so we have been inundated with Turkey.

Toms, hens and chicks are all around.

Turkey were a big part of the early American diet and eventually were eliminated from its natural range. Introduction programs have introduced them back into most of their natural ranges. Turkey are now located in forty-nine states.

We have everything they like to eat, which includes acorns, nuts, seed, fruits, insects, buds, fern fronds, and salamanders. As a matter of fact, my husband watched as one flock of Turkey scoured our front dike on the pond for crickets and he said there was no shortage of crickets to be had. You can usually tell when a flock of Turkey have been through the area because they leave scratches where they have uncovered nuts. We have a ton of Hickory nuts and they are by the driveway but I'm not sure if they like Hickory nuts or not? My guess would be yes.

They build their nests on the ground which really surprised me when I found this out. With all the predators around our area, you would think they would build in a safer area. They can have four to seventeen eggs and when they hatch from a tan egg marked with even tiny reddish spots they are downy and able to follow their mother. I have not seen this in the woods either and for all the time I have spent in the woods over the years, you would think that I would have run across one nest.

The Male gobbles to attract females and when she appears he struts around her. I have never witnessed this but I understand that it can be quite beautiful with the Toms feathers intensifying in color as the mating continues. I have seen wild Turkey in remote areas and have always been amazed how big they can get. The Turkeys I have seen around our property have not seemed quite as big as I remember but they are healthy and seem to populate quite well. Almost every night we see a flock of Turkey wander by our driveway and each morning we see little chicks feeding behind my chicken coop. The pictures I have in this article are from the creek line and this hen seems larger and heavier than the driveway flock. 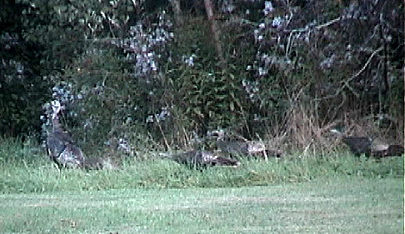 We take our walks later in the day now and when we enter the woods, the Turkey swoop down from their roost because we have scared them and they glide to another area on the property They look so awkward when they fly, and as I say it is more of a glide in my opinion. Every time I see a Turkey fly, I think of WKRP in Cincinnati where the manager of the station did a promotion for Thanksgiving where he released live Turkey from a helicopter and they plunged to the ground. His response was "as God is my witness, I thought Turkey's could fly."

We called our friend who is a champion Turkey caller to ask if the young Turkey we have been seeing recently would be able to make it through the winter. To us they look very small but I have a feeling that they will make it. We haven't had a frost yet this fall and the ground is so dry because of lack of rain so maybe the Turkey know something we don't? Maybe we are due for an easy winter. I wouldn't mind that!

From our backyard to yours, there will be a turkey in our outdoor deep fryer for Thanksgiving but, it will be one from the supermarket! 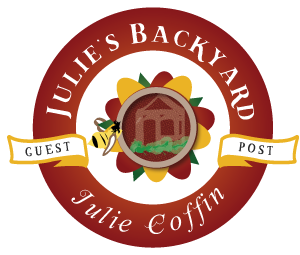