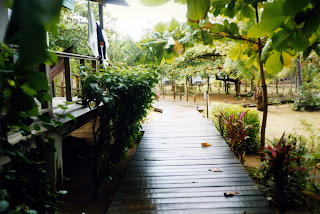 We've been to Honduras twice. Both on Scuba trips. This was prior to 911 and the flights to and from were very nice.The first time we left from Canada but the second time we left from Buffalo. The first thing they tell you to bring is a good mosquito repellent and I would stress that to anyone visiting Honduras. I've heard the expression of  mosquitoes carrying you away and I think it must have originated there.

Saying all of that, I still consider Honduras to be one of the best diving experiences of my life. The Dive Masters name was Tavo and he was just a pleasure to dive with.  He took us places that I know we wouldn't have found on our own.  That was the first time we ever used a dive master to guide us.  We were in a small boat to get to the dive site which meant we could take a short cut over the breaker and be the first on the dive site which is always a good thing because the water isn't stirred up and the creatures aren't scared away. 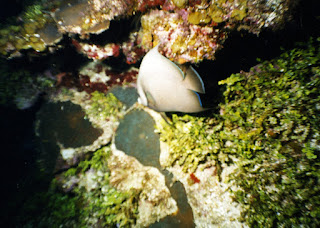 We would enter Spooky Channel which is a formation that you swim through or in this case scuba dive through that is extremely large.  The sides of the formations are covered in beautiful corals and lobsters and crab hide in the holes scattered throughout the formation.  Tavo took us to see a huge brown moray eel and he supervised my petting it.  I have always said that they look like wrinkled puppies or the Shar Pei puppy and I trust the larger, older ones more that the younger eels. They seem to know that we aren't there to harm them but the littler ones seem skittish and fast to react.

We slept in what can only be described as a hut and our first night while sleeping we heard something in the ceiling and I slept with the covers over my head just in cast something came out.  The next day my husband decided to take matters into his own hands and spray under and into the eves of the hut.  That action proceeded to irritate the animals that were in there and they proceeded to exit.  The largest swarm of bats came out and we were amazed.  We told the people who ran the complex about the experience and they asked us not to disturb the bats because they ate more mosquitoes than any other prevention they could think of and we completely understood.

When weather permitted we would eat in a common area that was open on all sides and when the weather was not good we would eat in a building that was on a large hill that had probably a hundred steps going straight up. The food was very good and the last night was to feature all the lobster you could eat and many other wonderful side dishes.  Throughout the week we had rain but nothing serious until the end of the week.  Most of the group had signed up for a white water rafting trip that was reached by plane. People were to take only the bare essentials and most everyone did exactly that.  I am told that they enjoyed the rafting trip very much.  However, when they left our island the weather turned bad and they were not able to return to the island.  That meant that the remainder of the people had to pack up all of their belongings plus all of the belongings of the people that had gone rafting.  It was very difficult.  People had left their contacts and glasses and all of their clothing.  Money had to be packed and we were not sure if they had hidden anything. 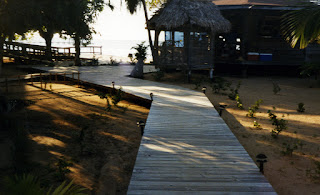 The last night was lobster night and it was spectacular for those of us who could attend.  Some were cursed with Montezuma's Revenge and were stuck in their rooms close to the bathroom.  Not only that, but we had to help secure the chairs and boats in the complex.  Not an easy job with winds blowing severely! The group that remained on the island flew home the next day but the other group had a few delays and not having any personal items with them, had a rough time of it.

All in all I truly enjoyed the diving experience and food and would recommend the trip to any diver but lets not forget that the stay for divers isn't always the Four Seasons.  We have been in some beautiful resorts and we have been in some primitive destinations but it isn't always the accommodations that make the trip.  Sometimes it is just the company and the diving experiences.

From our backyard to yours,
there is a whole other world beneath the sea and you too can enjoy it.