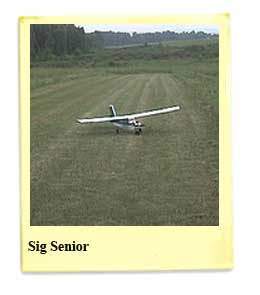 Several years ago, I decided, and I’m still not sure if I made the right decision… I thought my husband needed a new hobby, so as carefully as I pick out all of my presents, whether it be for Christmas or birthdays I purchased a remote control plane for my husband.  He was skeptical at first but knowing he was smarter than the average bear he finally decided to try it.

His first plane was a duracraft.  This consisted of a rain-glow gutter, wings, a propeller and an engine.  Sounds simple enough, but believe me it took a great deal of patience to succeed at a successful take off and landing.  Thankfully, we had a dear friend who had flown before and was in our backyard to help with the initial take off.  At that point, the friend would hold the plane and release it as steady as possible in the air while my husband would take control of the remote.  After a few tries the plane went sailing into the sky and we were very excited.  Now came the landing and that wasn’t pretty.  But again, patience won over and after all, when it crashed, all that was needed was to replace the gutter and possibly the propeller.  It was seemingly very inexpensive. However, like most hobbies, the better you get, the more gadgets one needs.  I think there is an unwritten rule for men that says, whoever dies with the most gadgets, wins!

Along the path of learning a new hobby there is always a chance of some accidents.  Let me tell you that the doctors and nurses in our area knew my husband by first name.  It came to the point  that,  I  knew  my  husband  had  had  an  accident  when  he  came  into  the  house  and  went  directly  to  the bathroom  and  closed  the  door  and then  said  I will  be  back in  awhile  and  I knew he was going to the hospital and would return a couple hours later all  bandaged up, usually on some part of his hands.

Next came several beautiful planes that ended up in what can only be described as the basement cemetery, along with many remote control radios, and any other parts that could possibly be salvaged to repair another plane that bit the dust. This went on for years until one day I had another brilliant idea to purchase a helicopter for him.  What was I thinking?

Well, in order to successfully fly the helicopter he thought we should travel to Allentown to have an instructor teach him the ins and outs.  The ride out to Allentown was beautiful and when we got there we were to meet with the instructor the next morning. We met him in the parking lot of a breakfast place we had picked out and we followed him for miles out into a deserted part of the country.  My husband and I were both dubious about the whole experience at this point.  After all, we didn’t know this man from Adam and cell phones were not an option at that point in time and even if they were, we would never have gotten reception where we were and we really didn’t know where we were?  What were we thinking?  However, the day was a complete success and the instructor turned out to be not only very talented, but extremely nice.  He could land the helicopter on the top of a fence post and did many amazing flights for our entertainment.  When it was time for us to leave the instructor took me aside and said that my husband could conquer the helicopter if he had enough patience.  He did not have the patience to fly the helicopter.  I think he enjoyed the speed of the planes more than the precise agility it took to handle the helicopter.  Anyway, the helicopter was sold and he went back to flying all kinds of planes.  Most of the time in total control until…

My parents decided to buy my husband a water-plane and he worked very carefully building the plane and the day of the take off the family sat waiting excitedly in the back gazebo for the beautiful water-plane take off from the pond.  He stood on the bank of the pond with control in hand and started to taxi on the water.  The next spoken word from my husband was, “as God is my witness, I thought I had cleared the dock.  The plane was smashed into very small pieces.  The next plane was a Christmas present from me and again he worked hard to finish the plane by New Years Day.  He did and my daughter and I walked out to witness the take off.  The plane took off and kept going to the left where it never changed direction and came heading straight back at us and crashed into very small pieces.  We ran back to the house and when my husband came storming in with what can only be described as a handful of unrecognizable parts, he threw them down the basement stairs and swore he would never fly again!

Well, thankfully, a few years later, he got back into flying and this year he hasn’t had one crash and has over two hundred flights under his belt. I saved this little tidbit for last.  The reason I decided to go with the remote control plane in the beginning was to steer my husband away from ultralights, which he has always had a fascination with.  From our backyard to yours… now, who’s smarter than the average bear?