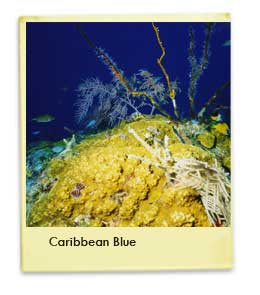 Fourteen years ago or so my husband was on a business trip. I told him I was going to the YMCA to try a scuba class. I went and the first thing we had to do was try on scuba gear. The gear consists of a mask, an inflatable vest, a weight belt, a tank and fins. We were told to swim from one side of the pool to the other, of course, underwater. Most people believe that you breath in oxygen. Not true. It is compressed air.

I made it halfway across the pool and tried to stand up. With the weight belt on it was impossible to reach the surface and I wasn't quite sure what to do. I started jumping up to get someone's attention and I did. One of the instructors pulled me out and reamed me up and down of the dangers of what I had done. I felt someone should have told me a little more before putting the equipment on me but I still thought I was going to like it. 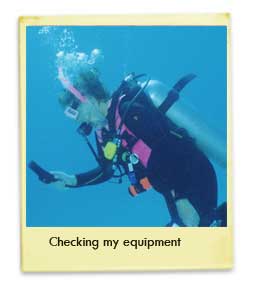 When my husband called that night I was excited and he said I sounded like an auctioneer. The next class my husband was out of town also but I went and we had to swim the perimeter of the pool three hundred yards. The reason was if we were ever in a position where we were in a boat, we would have a chance to reach the shoreline. I always considered myself to be a good swimmer but it was not easy to swim that far. I started out doing the front crawl and soon realized I would have to change my strategy.

I was forty years old when I took the class. In reasonably good shape and it was still difficult. The class consisted of swim class and a book class. I believe it was fifteen hours and a written test to complete the course and two open water tests to get your card. I guess my husband finally realized I was going to continue going and so he made up the classes that he had missed and in no time had caught up with the rest of the class. The hardest part for me was a maneuver called doff and don. This consisted of jumping in with all of your equipment and removing all of the equipment under water and securing it with your weight belt. Once you did the maneuver a few times you finally got it and I have to say, quite rewarding.

We had almost finished the course when our instructor offered us an opportunity to go on a live aboard to an island called Saba. Now the curious part of this whole story is a few months before this trip came up, I was looking in the newspaper under the travel section and there was a whole article about Saba. My interest was in hiking the island and my husband agreed we should do it. I took that as a sign that we should go. My husband was skeptical but gave in. So off to Saba we go. 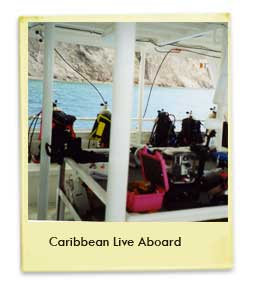 The first thing I found out was I have no sea legs. I felt queasy and weak and I wasn't sure I could scuba dive let alone survive a week on the boat. My husband wasn't quite as bad as me but I think nerves played a big part on the way we were both feeling. The group on the boat were very supportive and soon became friends.

The first dive was beautiful but also terrifying. I remember the water was warm and the color of Aqua Velva. My instructor took very good care of me and I guess he assumed that my husband was in control more than me and trusted that he would follow and be alright. Big Mistake! My husband couldn't keep up with us and got lost and decided to head for the surface. When reaching the surface faster than he had anticipated he soon realized that he would have to go down again because one of the first things they teach you in class is never leave your partner without telling them first. He came down only to find that the instructor had left me in an area and told me not to move so he could find the missing husband. The area in which my instructor left me was over a what I can only describe as a ravine with no bottom in sight. I felt like and astronaut. Even though it was exciting, it was also scary. We soon were three again and made it back to the boat. My husband stayed in the cabin for quite awhile convinced that he would be coming down with the bends at any moment. He didn't and obviously has enjoyed the new adventure for quite awhile.

There are tons of scuba stories and maybe we will revisit another island in the future.

From our backyard to yours, try a self contained underwater breathing apparatus.