If You Dig Deep Enough 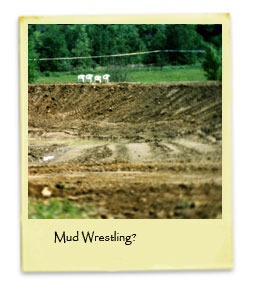 Seventeen years ago, June of 95, when we had the pond dug, it was just a huge hole in the ground. It is a quarter of a mile to walk around the pond. I know this because when we had the invisible fence put in the  measured around the top of the dike for me. In case you are wondering what an invisible fence is, I will explain it. If you have pets, especially a dog, you know that it is very difficult to keep them from harms way. The invisible fence is buried underground, about 8 to 10 inches and the dog wears a receiver around his neck, just like a collar, and when trained right, should only receive a couple of shocks to begin with and then from that point on the dog knows not to go within 8 feet of the electrical, underground fence. Our dog has approximately 2 acres to run around and do as she likes. Never has she been in the front of the house which is close to the road. A warning to all owners of the fence, make sure when the dog is taken beyond the fence, to remove the collar and don't touch the prongs yourself because you will receive a shock just like the dog. I know.............

The first thing we worried about was the amount of water coming into the pond. Although, there are six springs at the bottom of the pond, we were convinced that it was still coming in too slowly. My husband had the idea of pumping water into the pond from a crick that runs close to the pond. It was very successful and sure enough by late fall, we had a filled pond. We were very excited because we thought we could ice skate that winter. Well as luck would have it, I broke my leg when our golden retriever ran through my legs from the back. I could hear it snap. I was laid up for almost three months. 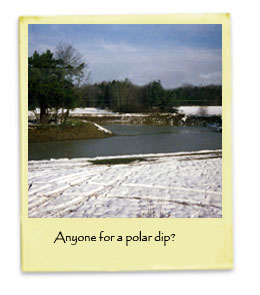 The following spring was our first opportunity to add fish to the pond. We decided to treat the pond as a big aquarium and so far it has worked beautifully. I had always had an aquarium in the house so knew enough to start us out. We knew we wanted bottom feeders to keep any weeds that might appear and we knew we wanted bass, bluegill, some sunfish and jack perch. We especially wanted coy. It is true that a fish will grow to the size of its environment. So we have some very large coy out there. They are very friendly and fun to feed. They like small pieces of bread and we have bought bags of fish food. The bass feed on the minnows that appear around the edges of the pond. The bass look like soldiers waiting for an attack. They will actually follow us around the pond as we take a walk.

One year my husband decided to add something different and ordered some African frogs. When he told me they were supposed to grow 3 feet tall I almost died from laughter and told him we would have to make sure no small dogs or children were around the pond. Luckily the frogs didn't make it through the winter or so we think. I will say we have the strangest color frogs I have ever seen. Maybe the African frogs mated with some of the other frogs and that’s why we have bright bluish green frogs.

I have gone scuba diving in the pond a couple of times. Once, looking for my brand new fishing pole, that fell off the back of the paddle boat one day. I never did find it. It was black as midnight without a moon. I felt my way around the bottom but with no success. I did see some ghost fish that we had added a year before and thought hadn't made it. We see hundreds of little toads, about two inches long, on the top of the dike in late spring. I think the bass get most of them. We have named most of the fish that have survived the last twelve years. I think our two favorite would be the coy named Wilber and a channel cat fish named Kong because he is so big. It doesn't take him long to finish the bread pieces on top of the water. We found out too late that Wilber should really have been Wilma but she has kept the name all these years. We have baby coy that never survive even though we have tried our hardest to separate the babies from the rest of the pond. Something always sneaks in. I guess that’s just nature.

There are a lot of birds including several Blue Heron, that appear throughout the warm season. They did kill a walleye that was in our pond and my husband was very upset but they are so prehistoric looking you can't stay mad at them for long. I would recommend a pond to anyone who truly enjoys nature. There isn't a better way to learn about fish, frogs, toads, water fowl and even snakes than to watch them grow right before your eyes. From our backyard to yours, try some fishing!