My Favorite Time of the Year 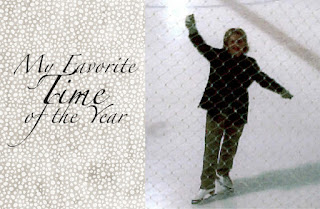 Growing up in the northeast, I never thought too much about the snow. It was something that came once a year. As a matter of fact, when I was younger it couldn't get here fast enough and couldn't stay long enough.

I started ice skating when I was in 3rd. grade. We had a skating rink not far from where I grew up. It was an outdoor rink. In my opinion the only kind. I enjoyed the snow coming down as you skated and the huge snow banks at the back of the rink. We had moonlight skates, speed skating, backward skating, any kind of skating you could think of. I remember when the price to enter was fifteen cents and that entitled you to three hours of fun filled skating, socializing with your friends and eating. There was always music to skate to. The latest top 100 on the hit parade.

Just getting there was exciting. When I was younger, my parents would take us and pick us up but as I got older, we walked to and from the rink which in itself was fun. We never seemed to get cold . We dressed to keep warm. We got to meet kids from other schools and made friendships that lasted for many years. We would make pompoms of every color and change them to match our outfits. If we were lucky, skating would start just about the time Christmas vacation started and would last until early spring.

Skating wasn't the only thing we did to pass the winter by. We would build snowmen, forts and my personal favorite the snow horse. I never understood why more people didn't build snow horses. Why not actually use something you had built. Snow angels. Another favorite. Maybe more utilized by girls than boys but could be very entertaining.

I remember one winter my parents, grandmother and uncle armed with shovels and brooms cleared a frozen crick for ice skating. I had an aunt that was very close in age to me and we skated what seemed forever. We followed the crick line as far as we wanted that afternoon. It seemed endless.

I met my husband skating when I was fourteen and he was sixteen. The first night I met him, he picked me up and carried me around the rink. I was in love. We got engaged five years later on the first day of winter, married a year later and two years later our daughter was born in December. Yes, winter has always been my favorite time of year. So just a week before Christmas, get out there and go skating , build a snow horse or just take a walk with that special someone in the snow.

From our backyard to yours, Let It Snow and Happy Holidays!