Dogs We Have Known 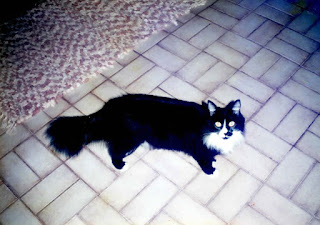 We are definitely dog people.  We do have a cat who was supposed to go with our daughter but somehow never seemed to leave. She is a wonderful cat but I say again, we are dog people!

We had a Cock-a-Poo named Dinky who would, on command, dive off the diving board.  He was a sweet dog and never gave us any problems.  We had a Dalmatian who got into everything imaginable.  The one that pops into my mind is when she got onto the counter and chewed open a grape drink mix and brought it into the living room onto the new couch.  Needless to say it was a mess.  Everyday we came home there was something else destroyed.  We didn't keep her very long because we were both working and it really wasn't fair to her or us.  She ended up going to a farm where there were other Dalmatians.

We had a Irish setter who would lay by the fireplace.  She was a beautiful dog and was very smart.  We had a Poodle named Pierre.  He was so cute and also very smart.  We suspect he was killed by a bear.  He never came back with our Black Lab, named Jack, who we rushed to the veterinarian because he had three puncture wounds on his hind quarters.  Jack was a good dog also and would play with old golf balls.  The kind that had rubber bands wrapped around the core and when he would puncture the ball the bands would pop and fly all over the place.  It was very funny to watch.  He would catch birds in his mouth and when you pried his mouth open, the bird would fly out. 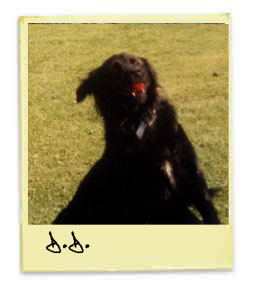 One of our favorite dogs was a black pound puppy.  My husband took our daughter Christmas shopping and they came home with a puppy.  We still had the black Lab and I did not want two dogs!  How can you refuse a child on Christmas Eve.  My husband was not on the Best Husbands List that Christmas.  He looked like a cross between an Irish Setter and Black Lab.  He had the personality of the Irish Setter.  Very kind and just a great dog. He did chew our wooden furniture and my daughter would sand the bite marks out.  We would call him Monkey arms because when he laid on his back, his legs looked just like a Monkeys.  I would buy him a toy at the store and he would take it over to the neighbors dog and drop it off.  Very generous.  Every morning he would take a swim in the pool and we took him on vacations with us and he behaved so well. 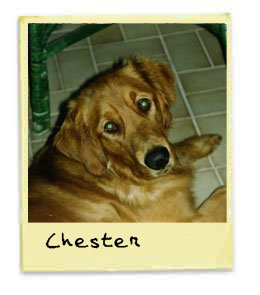 Our Golden Retriever was the first dog we ever bought that wasn't a pound puppy and actually had papers.  He was a character from the start.  Ran so fast I could hardly catch him.  That was when we decided to purchase the invisible fence.  It has saved us from worry and kept our dogs safe.  Chester very seldom barked and we took him on vacations with us also.  He loved the car.  He would go swimming with us and when the pond was put in, he would cool off during the summer and swim his little heart out.  We would comment to people not to make eye contact with him because once you did, he wouldn't let you alone.  Hard to believe we would complain about too much love.  When he was little he would chew one of every high heel shoe I owned. Never understood that one.  He chewed our wicker furniture until there was nothing left.  He would chew every electric cord in the house, including the electric blanket cord, several times.  How he made it to a ripe old age of twelve, I will never know.   We lost him to old age last year. We had bought a Yellow Lab three years before and it seemed to keep Chester young for awhile.  The Yellow Lab is quite a character.  Her name is Belle.  She never chewed anything but tissues and has the biggest appetite I have ever seen in a dog.  She isn't very tall but she is wide.  I had planned to breed her with my daughters Yellow Lab but decided against it and had her spayed.  We played hide and seek with our Golden Retriever and now have started to play it with our little Belle.  They both love playing.  Belle likes the pond more than anything.  She spends most of the summer wet.

We will always have a dog.  They are part of our family.  They are our best friends and people have commented that they want to come back as one of our pets.  That is quite a compliment and we appreciate it.  From our backyard to yours, I wouldn't mind a dogs life!