Road Trip to the Bahamas 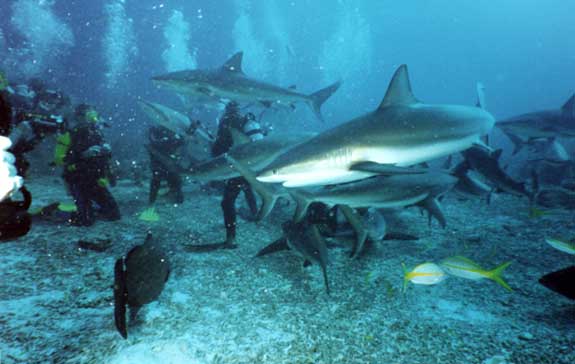 We have been to the Bahamas several times and I have to say, another one of my favorite places. The people are friendly, the weather is beautiful, food great and the diving is exciting.

We normally go to Stuarts Cove, where we dive with the sharks. They are Caribbean Sharks and we were required to take a test before we left home to enable us to dive with the sharks. Basically the test taught us that if we respected their space they would keep their distance. Like any other fish, if they are injured or sick, they could be dangerous but as long as you are attentive and use some common sense, you should be fine. 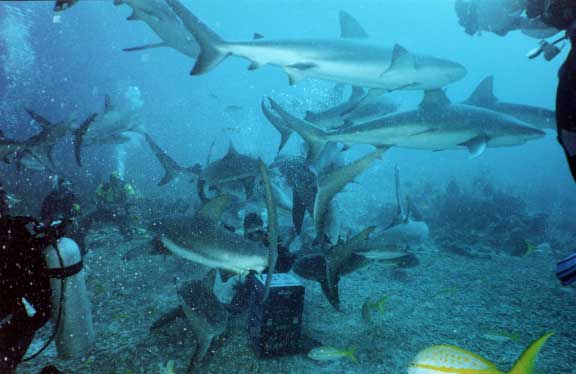 I was the first one off the boat the first time we dove with the sharks and that was right after they had chummed the water and for those of you who do not know what chumming is, they drop bait into the water to attract the sharks. I'm not even sure if they do it anymore because certain groups wanted to stop the process. Anyway, we were all fine and got great video. There must have been close to twenty divers in the water, all in a circle, with a dive master in the center with more bait and feeding the sharks. He had on a chain suit and I can understand why after watching him feed the sharks. They are not the most graceful of fish. I would guess no less than forty sharks arrived and were in a somewhat controlled feeding arena.

We were on our knees and everyone with a camera moved as little as possible while taking their pictures. I had a large strobe light attached to my video camera and at one point, a shark decided he might want a change of pace from eating fish and grabbed my strobe. I have the teeth marks on the strobe to prove it. I held on as tight as I could and he eventually left, without the strobe! The dive master said that sharks are drawn to the color white. My fins are white and my strobe is white. Now, he could have been pulling my leg but I'll never know. After the feeding was over, we headed over to a place where there were hundreds of shark teeth in the sand, under water. We found a few and some people made earrings and necklaces out of them.

We headed back to the boat but the next day we dove with the sharks in their territory. We kept our distance but they were mingling in and out of our dive throughout the entire dive which lasted about an hour. It was very interesting diving with the shark while they were in their element.

The next day we decided to rent underwater scooters and let me tell you, I got the biggest laugh ever while riding. There were three of us that rented them and we followed each other in single file for the most part but two seemed to go much faster than the other one. We kept losing the slow scooter which happened to be my husband's but he managed to do a somersault and ended up head first in the sand. When we looked back for him, we were not sure where he was. We were eleven miles from shore and unbelievably we ended up on a sand bar. My husband caught up with us and saw us laughing. Our batteries had gone dead and although my husbands scooter was slower, he still had juice in his battery. We ended up holding on to each others fins while the true and steady scooter pulled us back to the boat which was a good distance away.

My husband and I liked our hotel room so much that when we got home we remodeled our bedroom after it. We will have these memories forever. From our backyard to yours, take an adventure once in awhile!