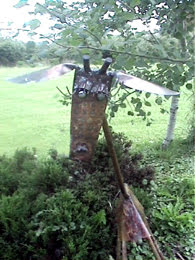 Since 1980 our family has made a trip to a local art show that my father-in-law had participated in. He worked in acrylics for most of his life and the paintings he created were in my opinion some of the best I have seen. He won many awards over the years and we enjoyed supporting him whenever we could.

There were many artists that returned each year and we were always eager to see their new works in different mediums. Time and time again we witnessed new artists appear and many went on to become very well known. Some even mentioned my father-in-law as a mentor.

The location of the art show changed approximately fifteen years later but always remained on the bank of our local lake. It was always fun to walk around the art show with the lake breeze cooling us, as we purchased little gems of art. There were not only the canvases of work but creations of dried flowers, work in metal, carvings and sewn crafts. My husband and I would look at everything and usually purchase something for our home or backyard. 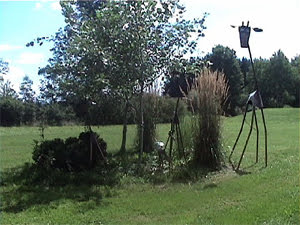 One year in particular, my daughter joined us and as we were observing all the new artists my daughter and I decided to play a trick on my husband. We stopped him and said we think he should buy a metal giraffe, that was five foot high, for our backyard. To our amazement he said, "you know I was thinking the same thing." He then purchased the giraffe. We thought he had lost his mind. The giraffe is made of copper and the way the artist has made them, they look very realistic. Well, as things turn out, we grew to love the giraffe.

The following year for my birthday, my husband bought me a four foot giraffe and now we had two. We would change the position of the giraffes every week, once the lawn was mowed and it turned into a game to see if we could spot the giraffes. The next Christmas I surprised my husband with a eight foot giraffe, that I hid at a neighbors house for a month, until Christmas Eve night, when my neighbor secretly brought it down to our backyard. I waited until my husband went to bed and placed a big red bow on the giraffe. When he woke up it was standing next to the Christmas tree. Let me tell you it was not an easy job getting the huge giraffe into the house. It doesn't weigh much but is very tall and hard to maneuver. Also, it was snowing and very cold outside. It was worth it, just to see the look on my husbands face. That made three giraffes. Two years later, as an afterthought, I bought him a two foot giraffe that the artist came out with that year and that made four.

Since my daughter married three years ago, we have a giraffe for each of us. The largest is my husband, the next largest is me, then my daughter and last but not least is our son-in-law. Every summer the herd can be seen following us about the yard. Every winter they stay outside where I bungee cord them to a tree. I check on them periodically throughout the winter and make sure they haven't blown over. Each year they have come back strong as ever. It just amazes me!

We now have a herd of giraffe and still move them around the yard. You might find them drinking from the bird bath or on their way to the pond. My husband planted several Pampas that eventually will be just perfect for the giraffe to visit because it kind of looks like their original habitat.

We told the artist one year that we moved the giraffe around the yard week after week and he just loved the story. He asked if we had any problem with the copper deteriorating and we said they still look as good as the day we brought them home. He now uses that story as part of his selling point. We saw him this past weekend at a local festival and we asked if we could purchase more eyes for the giraffe because two of them are missing an eye or two. He said to just visit him at his home and he would give us a couple of eyes.

From our backyard to yours, who said art had to stay indoors?