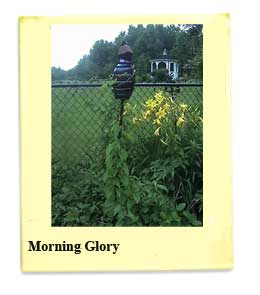 June is busting out all over. It really is, isn't it? One of my favorite musicals describes it all. Carousel! The Forget-me-nots are taking over the gardens and I have pulled them out leaving all the other perennials to burst through. The Morning glory that my daughter planted years ago when she still lived at home is taking over the fence and any other thing in the garden that it can attach itself to.

The Bee-balm or Monarda is really perking up. They are about two feet tall and have come back quite nicely. The humming birds will enjoy them shortly but for now the they are content trying out the Columbine. I have quite a few colors this year. I'll have to check to see if the yellow one has come back? 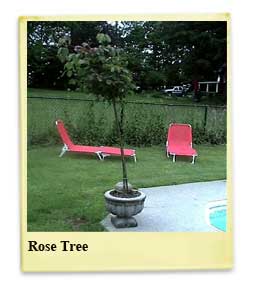 Most of the gardens are weeded and pruned and I have transplanted a Japanese Red Maple from out back to replace the crooked Walking Stick that did not make it. My daughter has given us two Rhododendron which I have planted in the spot that the Maple occupied. They were in her front yard when she purchased the house and had never bloomed for her so she replaced them with Spirea. Hopefully they will bloom for us next year!

I am hoping that the Japanese Beetles will not return since the grape vine is gone and also the Walking Stick that seemed to attract them. They were a real nuisance but my husband would collect them and feed them to the fish. Other than that I can't think of a purpose for them. They also like my roses but again I am hoping they won't be inclined to go after them. I purchased two new Rose Trees after looking all over for them. It seems that people are not as interested in them because of the wintering problems. The are Jackson & Perkins and are about five feet tall. They are coral red and won rose of the year in nineteen sixty three. They are said to have such a strong fragrance that they will scent a whole room. They are named Fragrant Cloud. I bought a small plant that is called Candy Corn this year. It is not a perennial but it was too cute to pass up. Of course it looks just like candy corn and it grows to twelve feet. I can't wait to see it's progress. Other than those two purchases I stuck to the same plants I usually buy for the containers. I like Wax Begonia because they not only look good all summer long but in the fall they seem to thrive.

I would like to find a fern that a friend of mine has in his backyard. It is called Cinnamon Fern and grows quite tall. Planted in bunches they make quite a statement. I have an area that doesn't get enough sunlight and I think the fern would be just the right plant for the area. The robins in the bush just off the patio have laid their eggs and the little robins took their first flight yesterday. A chipmunk decided to go after the little bird and the mother defended it valiantly. 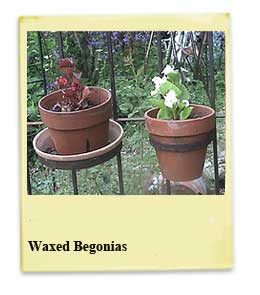 It is an exciting time of year for those of us who enjoy gardening. After all the preparation and work it takes to get the beds in order, let's just take time and truly enjoy this special time of year.

From our backyard to yours, while you are gardening try out your own rendition of "June is Busting Out All Over!"