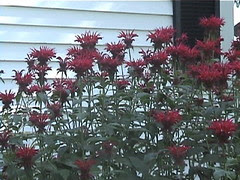 Each year we wait with anticipation for the arrival of the hummingbirds. We have Ruby-throated hummingbirds. The male having the ruby throat and the female colorless around the neck. We can hear them coming before the actual sighting because of their distinctive, loud hum. If you have never heard a hummingbird before, you would think a very large bee was coming, however, it would be the smallest bird in existence.

I used to put out a hummingbird feeder. I have had many over the years and the last being a pink, hand blown glass feeder that looked very pretty but I was not faithful cleaning the glass feeder and I don’t think they appreciated the lack of upkeep on my part. So for the last two years, I have depended on a variety of colored flowers to attract the little hummers as we like to call them and it has worked very well. If you decide to have a feeder for the little guys, then all that is needed is sugar water and possibly a red ribbon tied to it. You do not need to have colored water because the sugar is all that is needed to attract them. I have not seen the hummers drink from any bird bath but have seen pictures of them enjoying a water fountain. If pollen is scarce in an area, the birds will eat tree sap but also enjoy mosquitoes, spiders, gnats, fruit flies and small bees.  I really like these birds a lot, especially when they eat up to twice their weight each day.

The hummingbirds enjoy any tubular flower, red being their favorite. The orange Trumpet Vine is a good example and although the bee-balm is not a tubular flower they seem to flock to it. I have always believed that their long bill was their way of extracting the pollen from the flower but have just recently learned that their tongue forms a trough and the pollen is sucked in. 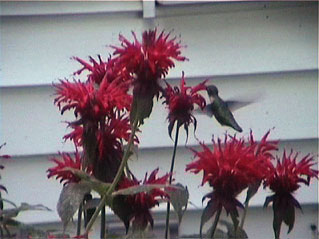 I would love to see a hummingbird nest and hard as I have looked have never been able to come across one. I know it takes approximately twenty to twenty-two days in their evolution to leave their nest so maybe someday I will be lucky enough to witness this. I see them landing on a dead pine tree branch every so often and wonder if they prefer this tree to any other? I have also seen a small brown colored hummer which in actuality is a hummingbird moth. Once they go through the mating ritual, the male moves on to another partner, leaving the female with the responsibility of the babies. The female can have up to three broods per year and once the baby leaves the nest and turns one year of age, can go on to mate also.

Females live longer than the male and the longest living birds last between five to nine years.  The males die earlier due mainly to loss of weight defending their territory, the mating ritual which can bring their wing beat from the normal ninety beats per second to two hundred beats per second and also the migration to the Gulf of Mexico.

These birds are amazing to me and each year our whole family enjoys watching them.

From our backyard to yours, check out the little hummers if you can catch a glimpse?