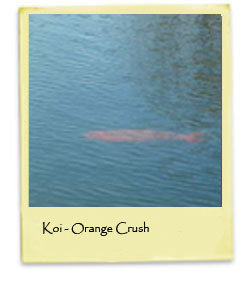 We haven't seen the huge bass that always lived under the dock. I hope he made it but I did see the heron at the pond just last week. We have quite a few bass but none that were as big as he was. My husband has been fishing but not catching much. Our yellow lab loves to go fishing with him. She gets so excited when he catches something. He always releases the fish on the bank first before putting it back in the water and the dog just dances around with a big old grin on her face. Believe me you can tell when she is happy because her grin is comprised of the eye teeth sticking out. 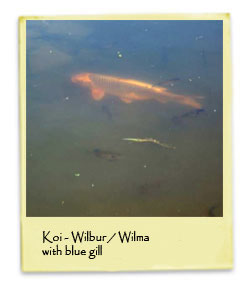 I am happy to announce that the koi have made it through the winter in great shape. They have grown since last year. I believe they are approximately twenty six to thirty inches long and Wilber has a girth of approximately twelve inches. But remember that Wilber should have been named Wilma because we found out too late that he is actually a she.

Wilber is very cool looking. He reminds me of an orange and black skeleton. Now that sounds scary but is not at all. There are six Koi that are traveling together. I think there are male and females traveling together and should be mating anytime. They swim around the perimeter and hide in the Water Iris and any grass that my husband has opted to release from the mower for the grass carp. 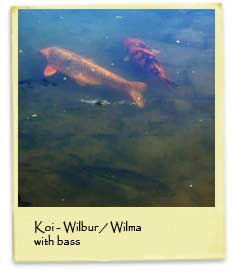 We saw one of the grass carp the other day. It is as big as the Koi and has only been in the pond for two years. When we first got them they were about ten inches long so you can see that they grow very fast. We have read that the grass carp can jump very high and have been known to hurt people in boats and on docks. And on the other hand I have read that they are a very shy fish and will allow other fish to take the bait before they will go after it. We purchased the carp to eliminate the weeds that would appear in late summer. They did their job and our pond is weed free. Because of all the rain and snow melt that we had this year our property is extremely wet. There is a small pond at the back of the property. It is roughly ten feet in diameter and loaded with toad eggs.

They lay their eggs in a chain. My husband transported the eggs to our large pond so we could have more toads. I remember one year while walking around the pond you had to watch where you were stepping because there were so many small toads hopping around. They were very cute.

The channel cat fish is massive but very docile. He can finish bread that we through in the pond in no time at all. He survived the winter also but has a mark of some kind on his scales. I'm not sure what happened there.

Of course there are the bluegill. And there seems to be a ton of them once more. We might have to flag down the Amish family again. I thought it would be a few years before the population grew back. I was wrong. Maybe we could have a fishing party. I don't prepare fish very well but I would be willing to give it a shot. My husband suggested using the turkey fryer. That is a possibility. A huge fish fry could be fun!

Of course the fun will have to wait a bit because there is still work to do around the pond. Painting the dock, cleaning the gazebo and weeding the whole area. It could be July before we finish every job that has to be completed.

From our backyard to yours, I better get to work!