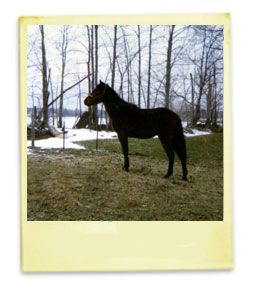 When we first moved in, we were so excited to have a huge barn. My husband had said if we ever had a house with a barn he would get me a horse. I had never owned a horse, but I had ridden before. So when we moved in, a horse was not far behind. She was a black and white Morgan, who I named Raven. She was expecting a colt in early May.

To look at her, you would never know that she was expecting. I would ride her and she was very accommodating. It was like sitting on a rocker. To be honest, I think I liked taking care of her more than riding her. The smell of the barn with the hay and oats was very inviting. There is nothing like a clean barn. She delivered her colt right on schedule.

My husband came home for lunch the second week in May and we took a walk to the barn to see if anything had happened and the first thing we noticed was a break in the fence. Raven had broke through and we found her next to the big pine tree with her baby next to her. As we stood there the colt hopped up and started to nurse from Raven. It was a sight I will never forget. We managed to get both into the barn and they seemed very happy. It wasn't long before my husband had a horse and we would go riding together. One particular afternoon, with snow quite deep, we rode out back through the woods and to the other side to another pasture. As we were leaving the woods my horse started to lay down. I had never experienced this before and was a little scared. My husband said to jump off and I did. Raven decided to take a roll in the snow. Back and forth she would roll and finally she got back up as if nothing was out of the ordinary. We now had three horses and it was fun. One day we received a call from a neighbor and they said that our horses were on the main road and one of the horses hit a car. Yes you read that right. The car didn't hit the horse, the horse hit the car.

Needless to say the owner of the car came to our door and we had to replace his mirror. Next we had to retrieve the horses. Luckily, once we had Raven, the other two just followed along. None of the horses were hurt in any way which is a miracle in itself. 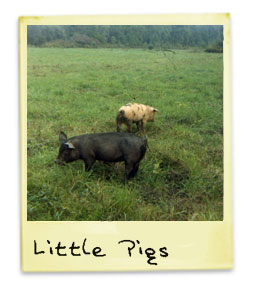 The next project were five little pigs. They were very cute and contrary to popular belief, if you keep their stall clean they will keep it clean. They grew very fast. One day in late summer, I remember I had a bad cold, my daughter and her girlfriend came running into the house screaming that the pigs had gotten out of the barn. I came running out and chased the pigs all over. We finally were able to grab the pigs and as I was leading them up to the barn I looked on the road and there sat a state police car and he was laughing his head off.

Next we had a cow and we named him Jim. Jim didn't like to come out of the barn. We would lead him out onto the grass and he would just lay down. We never could figure that out but Jim was no trouble and he was a likable cow.

We had a barn cat that came with the house and every so often we would see a litter of kittens. It was great fun! The barn was very useful for not only raising animals but it held all of the tools and we stored picnic furniture and anything else that needed storing there. On the side of the barn I had and still have a cactus garden. My uncle gave me sprouts from his cactus that he had at his house. Apparently friends of his had traveled out west and brought back samples of desert cactus. I have had the garden for many years and the cactus survive and bloom every fourth of July. It is a beautiful sight to see. 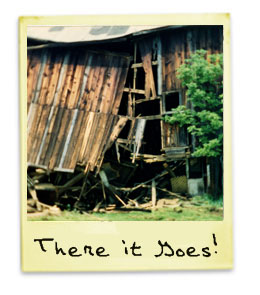 When the pond was made, we decided to have the barn taken down. The man digging the pond said he could tear down the barn and bury it in the back yard. We told everyone we knew that the barn was being torn down and if they wanted anything out of it or if they wanted any of the barn wood to come and get it. One friend came and took the barn wood to make bird houses for his sister. So somewhere in Maine there is a piece of our barn. My husband gave almost all of his tools away and to this day tells everyone that I let the tools go because he wasn't very handy with them. It was an exciting day. I made sandwiches and tea for everyone that came to see the barn taken down. There were a lot of people and none of us were disappointed. I had asked the man if he could save my cactus garden and he just looked at me like I was crazy but he was able to save it.

With the barn gone, the view was opened up tremendously. The barn had served us well over the years but it was time to let it go.

From our backyard to yours, change can be a good thing!