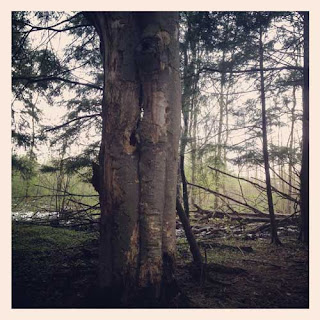 Last spring while taking a walk out back in the woods my husband pointed out a beech tree that had lots of big holes in it. I knew what they were caused from but I had never seen the bird that had made them.

We have several smaller woodpeckers that frequent our bird feeder, more in the winter when we put out suet for them, but never had I seen a Pileated woodpecker up close. It was at least sixteen inches tall and the colors were vibrant. It flew into our bird station area and landed on our pear tree. I called my husband out into the kitchen to see this great event. He loves birds just as much if not more than I do. He was just as excited and grabbed for the binoculars. The previous Christmas I had gotten him binoculars that focus automatically. Within seconds he had the bird in the viewer and then handed them to me. 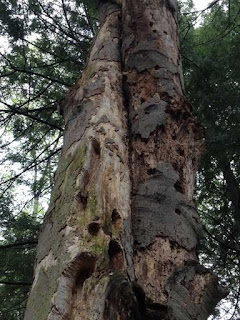 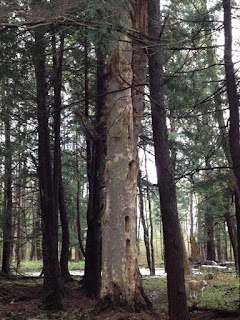 It was just beautiful. I watched for awhile and then continued what I was doing in the kitchen. Still looking up every so often but not paying too much attention until I heard this unusual noise. It was the beautiful woodpecker, pecking on our pear tree that had just started producing two years before. I then screamed for my husband to go and chase that son-of –a-gun out of our lawn. We went down to see how much damage it had done. It is just a good thing we were home when the woodpecker decided to visit because it put a big hole in the tree. 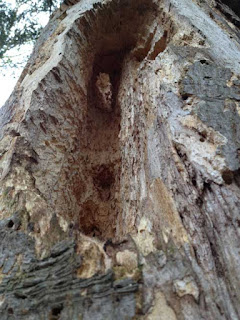 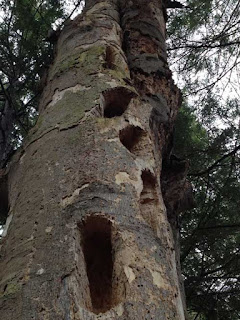 It didn’t return to the yard again that summer that we know of.  I’ve taken many walks back to the beech tree to see if I could see it making the huge holes but have never been able to catch it in action.  I understand that it pulls the bark off with its sharp bill and collects carpenter ants and other bugs with its sticky tongue.  The large holes that it makes, is also used for roosting and nesting.   When we had the property logged, we were fortunate enough to have a man that really appreciated nature as much as we do.  He left the beech tree for the woodpecker to inhabit, as well as many other trees that could have some value to the natural habitat.  Owls, some bluebirds, wrens and chickadees use the holes to some advantage also. 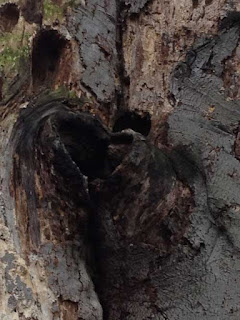 I used to buy large packs of suet at the grocery store but now we purchase smaller packets in different flavors for the woodpeckers.  You can find them munching on peanut butter, blueberry and many other flavors in the winter months.  For ninety nine cents your woodpeckers can have a veritable feast.  Now I know that nature is nature but I have to protect some of our trees from that big beautiful Woodpecker.

From our backyard to yours, if you hear some heavy pecking outside,
snap a picture and then holler very loud!