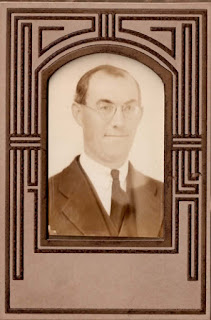 My husband was working on a doorway in the kitchen when he reached above and into the door frame. He pulled out a perfectly preserved picture of a man we later found out to be a preacher that had lived in the house many years before. This was not the man that had painted the house pink. The preacher had lived in the house during the depression era. It is said that to keep himself warm he would burn the lathe in the kitchen. Hence, the picture in the wall. Now why or how he decided to do this, is a mystery. We were lucky enough to know a neighbor who knew the preacher quite well and would visit him when he was a young child.

Another mystery involves the Christmas trees we planted on our property. We had gone to Colorado skiing one December and when we returned we noticed that one of our blue spruce had been cut half way down and the only explanation we could come up with is that someone had cut the tree to use as their Christmas tree. Now this wouldn't be as horrible as it sounds but the tree they cut down was in our front yard. I only hope they truly enjoyed our Christmas tree.

I saved the best for last. In our first house when we were moving in, we had a lot of help. Friends, family rallied around to make our first home comfortable. Our master of ceremonies was upstairs cleaning a hallway and hollered down and asked what I wanted done with an old rug that was rolled up. I said to throw it out the window. Thank heaven he decided to open it up. When he did, he found discharge papers from the civil war. They were approximately thirty by twenty inches. It told the story about how this particular soldier was wounded in the leg by a minnie ball and discharged because of this wound. It was signed and in excellent shape. When we moved from the house we gave the discharge papers to the family that the soldier was related to. I hope someone has taken good care of the discharge paper because it truly was very special.