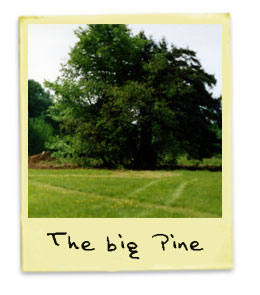 It wasn’t as big as a red wood but it was a very big pine tree. This particular pine tree was located in the center of the property and also was supposed to be a highlight of the pond.

But let me tell you the beginning of the story of the huge pine tree. It was over six feet in diameter and the branches hung low. At the base of the tree, there were fox dens and I imagine ground hogs took refuge there also. It wasn’t a scary place because I don’t think animals lived there when we first moved in and after that we would take walks out to the pine tree just to marvel at its height and to walk around the total tree was a walk in itself.

My niece and nephew would join my daughter on the long walk out to the pine tree. Granted, they were very little at the time and to them it was an adventure, especially when you are carrying toy teapots and cups. I remember in years to come I would find little toys under the great pine. About five years after we had moved in we had a terrible lightning storm. Sure enough, the top of the pine tree was struck and from that day on it took on a different look. Certainly not as tall, but it still maintained a giant dignity.

When the pond was under construction there were a lot of details to work out. How deep do you want it, how large around should it be? What shape do you want and how steep do you want the sides to be? We decided on a horseshoe shape, with the pine tree on a peninsula. We bought a white swing to chain from the giant limbs and we could in vision it in our minds.

We have now come to terms that we live under Murphy’s Law. Anything that can go wrong, will go wrong. Everything was going along smoothly with the construction of the pond. Neighbors, friends and relatives would stop periodically to see the progress. It was quite a sight to see. The man working on his machinery down in the hole, looking dwarfed in comparison. Finally after a few weeks the peninsula was looking good and the tree was just the thing to set the scene. The swing now in place, we could sit under the pine and cool off. There is always a breeze at the pond.

The next year we saw more and more water around the base of the pine tree. By the end of June, there was actually a pond surrounding the base. Unfortunately, the water was stagnant and bugs were attracted to it. The tree was also looking very bad. It took a lot for us to make the decision to cut down the tree but it had to be done. My husband has always cut trees for our fireplace but this was no ordinary tree. He managed to cut the top down and remove all the branches. My daughter and I removed all the branches to the back of the property. It was now July 4th. Weekend and the only thing we could think, was to burn the rest of the tree down. Our neighbor said that if we could get it to a reasonable weight, he could remove the rest of it with his backhoe. It took five days of constant burning to get it to that point. It was kind of fun sitting back there by the fire talking to friends who had come to witness the conflagration. The big tree didn’t disappointment us one bit that summer. It took all we had to tear it down.

The next decision was what to do with the peninsula now? We drove all over looking for something different to put on the peninsula but when all was said and done we decided to go with a larger gazebo than we had at the front of the property. First we had to fill in the hole with gravel and new dirt. I believe there were at least ten dump truck loads of dirt and I don’t recall how many loads of gravel. Hard to believe one tree could leave such a huge hole. After that, we had to plant grass seed, cover it with hay and water it. Sounds easy enough, but of course it had to be one of the driest summers in history. We succeeded and the gazebo was delivered without a hitch. I placed a sign at the top of the gazebo which says, “Wonder is the beginning of success.” I have continued to believe in that throughout the years. From our backyard to yours, never give up!